Pandemic is the mother of invention

New York artists designed new work and new venues for interacting safely with audiences, businesses innovated with new methods to serve customers and creative citizens placed their own stamps in unusual places across the city.

Out of the Bathtub, Into the Zoom 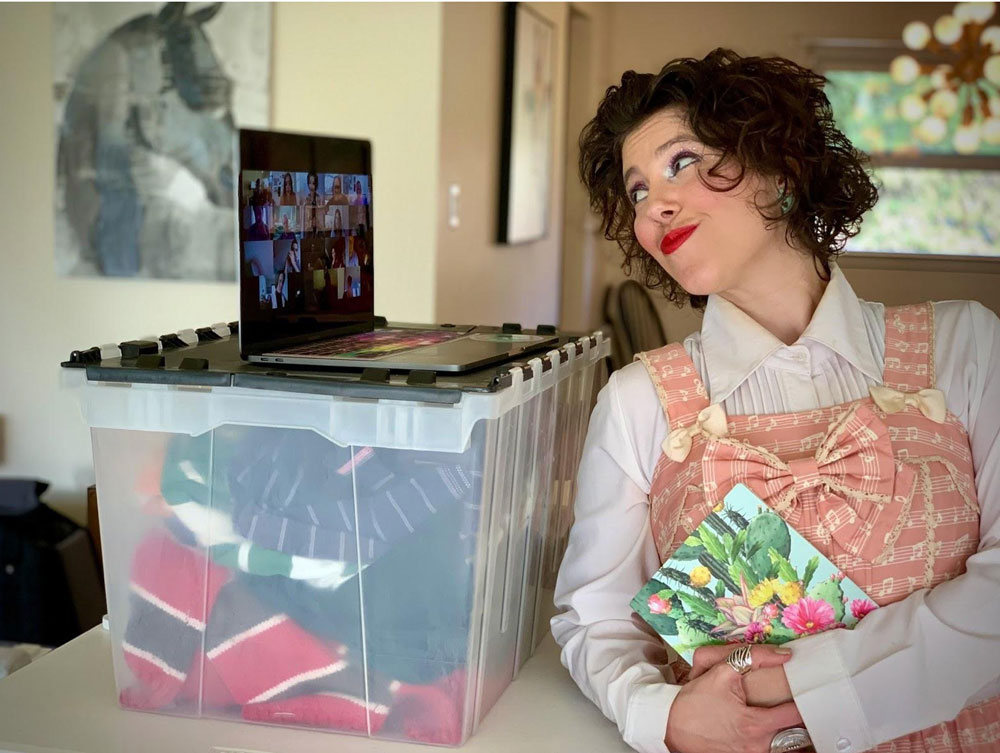 When Meta is better: Siobhan O’Loughlin takes an interactive journey through a real-life romance forged over Zoom. (Courtesy of O'Loughlin)

A creator immerses herself in theater at a distance

Since 2015, Siobhan O’Loughlin had performed across the country in “Broken Bone Bathtub,” an immersive show held in strangers’ bathrooms. As audience members gave her a bath, she explored themes of vulnerability and connection, making a space communal that’s usually deeply private.

In March, her upcoming tour was cancelled, and the Brooklyn-based performance artist, 33, traded the tubs for a laptop. “In a state of panic, I threw myself into Zoom performances,” she said. “That was just me throwing darts at the wall.”

“I lost not only my income from upcoming performances, but I lost my sense of relevancy as an artist,” O’Loughlin wrote.

Yet artists continue to create—finding new ways to adapt to online mediums and connect with audiences.

In March, stuck in a Ditmas Park apartment loaned by a friend and patron, O’Loughlin launched headfirst into her first online performance: a reading from her diary. Her early experiments with Zoom were improvised and free of charge, with the option to donate through Venmo or Patreon, the crowdfunding platform.

It was a dramatic departure from touring “Broken Bone Bathtub” from city to city. O’Loughlin was able to support herself through ticket sales and Patreon. Her nomadic lifestyle meant she wasn’t paying rent elsewhere.

As the lockdown continued, she developed more sophisticated shows, which evolved into a Zoom series “Please Don’t Touch the Artist.” read more >

Many people are finding new dramaturgical structures for the work that they’re doing, and new audiences. I can’t imagine that that won’t continue.

Professor at NYU's Tisch School of the Arts

Leigh Altshuler was caught off guard when she was laid off early in the pandemic. With no job prospects, the 29-year-old decided it was an opportune time, despite clear hurdles, to follow her dreams and open a bookstore in the Lower East Side.

Altshuler opened Sweet Pickle Books — which doubles as a fresh-pickle store — in November, having spent the summer driving around the tri-state area amassing a collection of books. Looking toward the holidays, she encouraged shoppers to think of small businesses like hers and the impact buying from Amazon has on them.

“Booksellers really put everything into what they’re doing,” she said. “They’re not in it for the money. It’s not a cash cow. You’re in it for the love of books.”New York City’s independent booksellers were forced to close temporarily last spring as part of a citywide lockdown to prevent the spread of COVID-19. To recover from the decline in sales and survive the uncertainty, shop owners are embracing new business models.

Despite Amazon’s success in selling books, the American Booksellers Association reports independent bookstores have flourished across the country over the past decade. But the pandemic has restricted in-person shopping, forcing booksellers who weren’t online before to start competing with one-stop shops like Amazon.

“March was a little bit of a scramble to figure out how to keep going. We put together a website, an online bookstore in about a week and a half,” said Nicodemus Nicoludis, bookseller at Powerhouse Arena in the Dumbo section of Brooklyn, who is also managing editor of Archway Editions, a literary imprint from Powerhouse that launched during the pandemic. The store mainly sold online into the early summer. read more >

March was a little bit of a scramble to figure out how to keep going. We put together a website, an online bookstore, in about a week and a half.

Bookseller at Powerhouse Arena in Brooklyn

“It’s been a huge point of community activism and we see a lot of people meandering around the Black Lives Matter mural,” said Lisa Martinez, from Grimshaw Architects, a global firm with offices in New York. “We started to understand how we could program the plaza itself to capitalize on what’s already happening there but also provide community amenities and infrastructure.” read more >

Decrease in active US small business owners, February to April 2020

A future without walls is on exhibit

When the coronavirus hit, indoor museums and cultural exhibits were not the only arts venues that were shuttered.

Installations by Arts in the Park, a city program that’s exhibited 2,000 temporary public artworks for more than 50 years, were cancelled until June.

But once Arts in the Parks was deemed safe to operate again, the Parks Department was offered with a new opportunity spurred by the pandemic: hosting Photoville, the annual festival that normally took place in Dumbo’s Brooklyn Bridge Park, as a citywide event.

Photoville founders planned to expand the festival to all five boroughs in 2021 for its 10th anniversary. COVID-19 fast-tracked the move.

“Everyone is enjoying the parks. People are going out to their public spaces” said co-founder Laura Roumanos. “So even if there’s another lockdown, people are still going to be outside.”

Pre-pandemic, the two-week outdoor event attracted more than 40,000 visitors a year. Now, instead of displaying photography in the shipping-container galleries synonymous with Photoville, galleries were installed in parks across the city. read more >

I was really excited about the fact that they still had it this year, given how everything else cultural and artistic has closed down.

One of the comedians behind "Comedy at Cooper" in Brooklyn

The sentiment is shared by their audience. “It just feels great to be around other humans, laugh, and for a moment forget there’s a pandemic around us,” said Emily Clark, an attendee. “It shows how lights can still shine. It’s special.” read more >