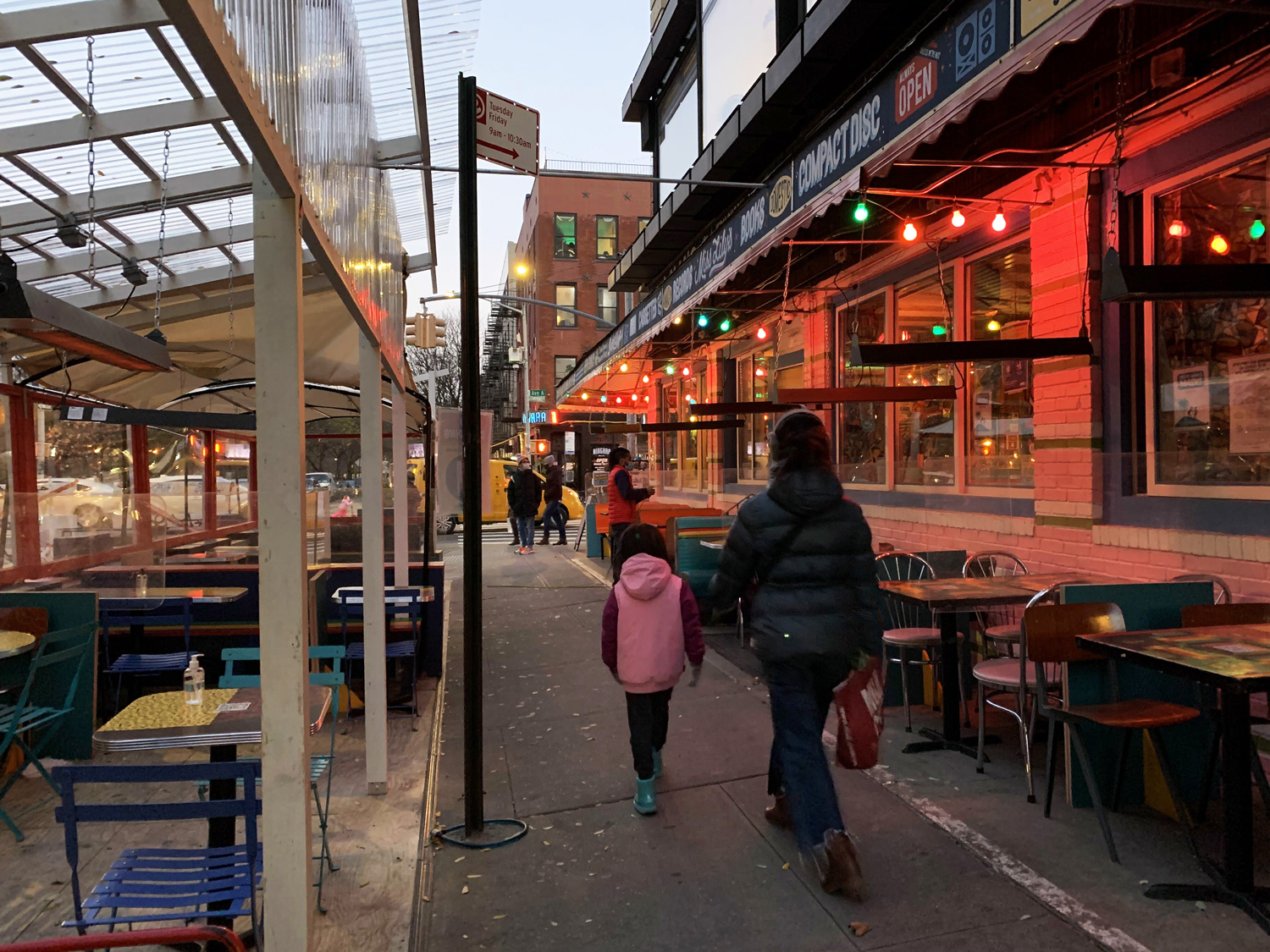 Cooking up creative ways to survive the winter

If there’s anything New York City restaurants have been forced to learn over the past eight months, it’s to plan for the unpredictable.

While the city threw a lifeline to restaurants by making outdoor dining a permanent fixture year-round, the mounting restrictions and sheer unpredictability of a New York City winter has left many restaurants trying to stay two steps ahead of a city that seems to be systematically two months behind.

“It’s a complex and messy situation,” said Moshe Schulman, one of the managing partners at the wine bars Kindred and Ruffian in the East Village. “We’re just kind of trying new things and seeing what sticks.”

Left to their own devices, many restaurants are taking matters into their own hands and staying creative as a way to survive the winter. With the city announcing a shutdown on indoor dining in mid-December as the number of COVID-19 cases rose, officials have drawn criticism for doing too little to help restaurants weather these literal and metaphoric storms.

⇒ cont. Patrick Cournot, another partner and the beverage director at Ruffian, said both wine bars had been planning for the winter since June. “We’ve been thinking that this was reality for a while,” he said.

He and Schulman turned to science to figure out the best way to insulate their outdoor seating area while also maintaining enough airflow to stay safe. They invested in building out their wooden enclosures and bought heat lamps in August, half hoping, half expecting, the city would allow outdoor heaters for the season.

Both spots decided to go with an “Apres-Ski/Base Camp” vibe, reminiscent of a lowkey chalet on a mountain-top in Switzerland. They upgraded from a canopy tent to a half dome tent after studying the thermodynamics of an igloo and shifted from their Mediterrenan menu to selling high elevation wines, hot cocktails and Alpine-themed foods.

“That allowed us to offer something to our guests that actually embraces the cold rather than fights it,” Schulman said. “[It] puts them in a situation where they can almost get comfortable with the elements.”

But it hasn’t been easy. Businesses across the city feel like they’ve been left stranded by city officials. 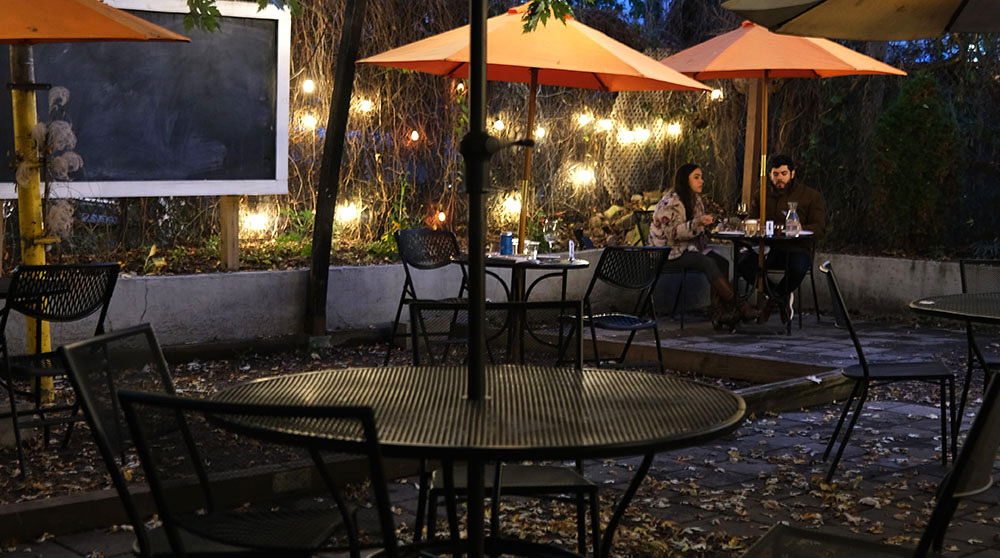 As of August, employment in the restaurant industry declined to about 55% of what it was in February, before the pandemic hit. To continue operating, 44% of restaurants opted into outdoor dining, according to a September report from the state comptroller’s office. With most of the city navigating the outdoor hospitality world for the first time, it’s been difficult to keep up with regulations they’re unfamiliar with or that the city has yet to iron out.

And with many New Yorkers still uneasy with indoor dining, restaurants are that much more focused on making their outdoor setup appealing. One New Yorker, Sissi Nie, started an Instagram account, @covid.date.spots,  curating a selection of restaurants in the city with heated seating.

“I have been preparing for sitting outside, even in NY winters, since the summer. [I’ve] been buying insulated leggings, wool socks, big coats, and thick hats,” she said. “I am not planning to do indoor dining until [a] vaccine. I want to support these restaurants, but if I can’t outdoor dine, then it will have to be takeout only.”

It’s really made me appreciate and respect the strength and resilience of the hospitality professionals in this city even more. I don’t think NYC streets will be the same after this.

Nie, who works in tech, said she was amazed by restaurants’ ingenuity over the past couple of months, whether they played up their outdoor seating or shifted their business model to adapt to the pandemic needs.

“It’s really made me appreciate and respect the strength and resilience of the hospitality professionals in this city even more,” she said. “I don’t think NYC streets will be the same after this.”

At the onset of the shutdown in March, Popina’s owners shifted their business model to selling wine and provisions from their store on Columbia Street in Brooklyn. As the weather grew warmer, the owners opened up their backyard to first come, first serve seating, while keeping the same model of ordering and paying upfront. For winter, they ordered a set of heat lamps that have yet to be approved by the fire department. 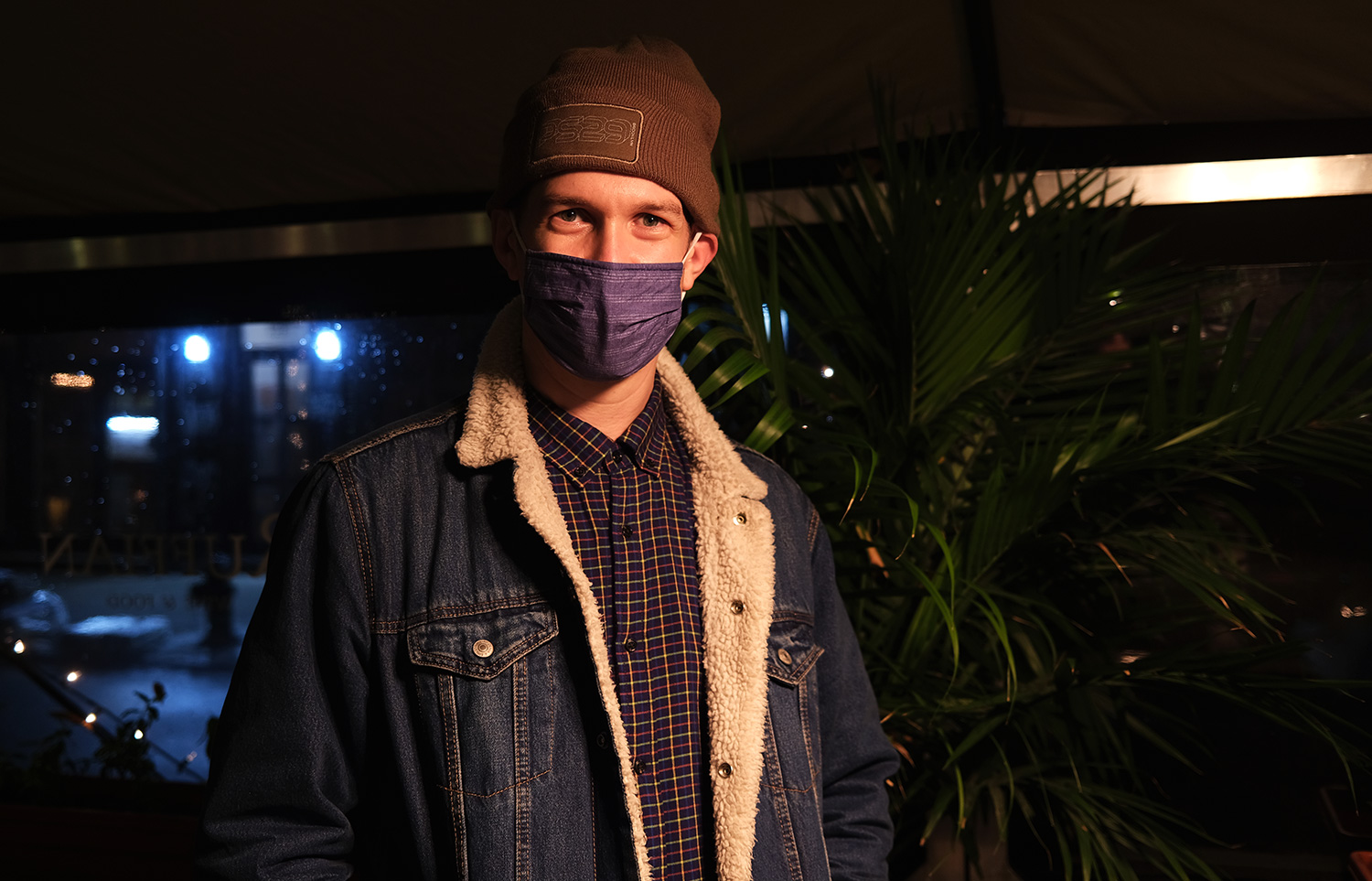 Patrick Cournot, a partner and the beverage director at Ruffian.
“They don’t make it easy, “ said co-owner James O’Brien about the fire department. “To be honest, our main concern is not actually the heaters – because I think people have become more resilient – I think it’s the food getting cold.”

The way they’re set up now, diners order at the front of the restaurant, grab a number, and take a seat in the backyard and wait for their fresh pasta to be served at their table. On a relatively mild December evening, though a slight breeze picked up, most people in the backyard looked comfortable, all wearing jackets and appropriate leather.

“Hopefully there will be a new rebirth, a renaissance, after the pandemic, but it’s going to be a very long recovery, and unfortunately there’s going to be a lot of devastating loss along the way.”

Still, O’Brien was realistic about the coming months. At the end of the day, he said, his customers’ and staff’s safety was paramount. “If it doesn’t feel good, then it doesn’t matter if the money is there or not,” he said. “We’re kind of taking it day by day.”

Without government subsidizing, O’Brien says they might just have to hibernate until they can comfortably accommodate people again. Ultimately, looking beyond the pandemic is hard enough for those who think every other day could be their last one open.

Restaurants are in NYC’s DNA

“People have invested their livelihood in these businesses and now are just being wiped out and losing everything and it’s devastating,” said Andrew Rigie, the executive director of the New York City Hospitality Alliance. “Food, and restaurants, and socialization, is in our DNA, it’s who we are as a people. Eventually the industry will recover, the big question is how do we mitigate all the loss.”

He’s been advocating for the federal government to pass the Restaurant Act, which has been languishing in Congress for weeks. The bill would provide $120 billion in revitalization and aid small and locally run restaurants during the winter.

Planning for a post-pandemic world

Even with the prospect of a vaccine in the next year and the hope that New York City will go back to a semblance of normalcy, business owners are still nervous about the residual effects that could define the post-pandemic world.  As co-owner of Butler, a bakery and cafe in Brooklyn, Rod Coligado wonders how long it will be before people feel comfortable having dinner inside and around others again.

“Are we living in a different environment, in a different world now where sitting in close quarters with other patrons, or being in very busy bars, is something of the past?,” he asked. “Will New York ever go back to what it was like before? Who knows.”

Coligado thinks this is a reset for New York’s hospitality industry, and that it will change how people approach dining in the long-term. He believes the places that have found ways to adapt during the pandemic are the ones that will continue to thrive into the post-coronavirus future.

“If you weren’t willing to make compromises, make sacrifices or [changes] in strategy, then you were kind of left behind,” he said.

He credits Butler’s relative success over the past eight months to their quick service model. Even before the pandemic, customers were ordering coffee, pastries, and sandwiches through a takeaway window. From the onset, Coligado and his partner Hugo Murray knew they were going to do anything possible to see the crisis through.

“We haven’t worked this hard for four years to get to where we are to let this pandemic sort of end it  for us,” he said. “We thank our lucky stars, every day that we were one of the survivors of this pandemic. We also realize that we could have easily been on the other side of this.”