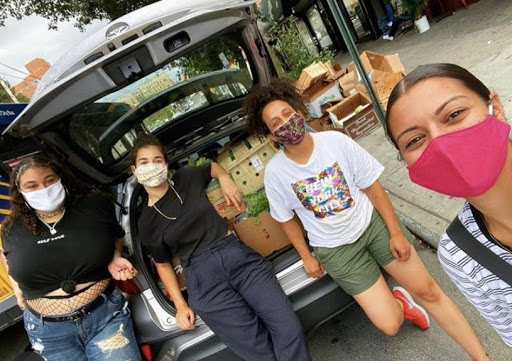 New leaders finding their voices during the pandemic

When 23-year-old Ali Garcia got a call about picking up a pallet of free mangoes, she filled her car with the sweet fruits and passed them out in her Bronx community. Garcia and three of her friends handed out mangos to anyone who wanted, storing the extras in a local community fridge.

“Imagine us just throwing mangoes in the air” says one of her friends Taziah Taveras, age 27. “Taxis double parked asking us ‘tienes mangos’ and we’re like ‘yes, please take them all. It was a beautiful day.’”

The Fridge Girls are one of many youth groups formed to address different social and economic issues brought on by the pandemic. Plugged into specific needs of different communities and armed with creativity and passion, New York City’s youth are leading the way through this hectic time

Community fridges are popping up over the city in neighborhoods where access to healthy food is hard to come by for many residents. The fridges fill a void felt by many folks utilizing food pantries: a lack of fresh produce and perishable items. Due to storage space, many food banks are limited in what they can accept and give away, leaving those who rely on the service to have to resort to canned and dried goods. Community fridges are an accessible way to store fresh food items, like fruits and vegetables. ⇒ cont.

If we’re all going to survive in this new world that’s being created, we all need to work together a little bit more.

The Fridge Girls were born out of a need  for transporting excess food to scattered fridge locations. The girls work with about a dozen restaurants and organizations that have food to give, but not the resources to get it to the people who need it. They make trips throughout the city to collect various food items and store them in the fridge, free for anyone to stop by and take what they need.

“There is a ton of food waste that happens,” says Taveras. “The reason isn’t because there isn’t food there. It’s just a lot of work to move it.”

The friends make food runs and deliveries five to six days a week, on average. They do this work almost entirely on a volunteer basis, with minimal funding from Venmo donations. The women say it’s a labor of love.

“Everyone’s heart is really in this,” says Taveras. “This is not a charity.”

The summer of 2020 also brought civil unrest in the country after George Floyd, a Minneapolis Black man, was killed by a white police officer. For Isaiah Buffong, 21, addressing police brutality against Black folks felt even more necessary at home on Staten Island. 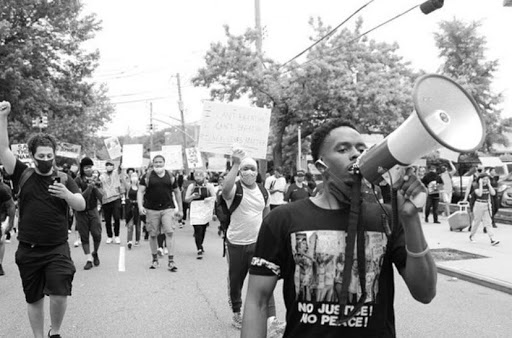 “Staten Island is the forgotten borough,” Buffong says. “And we don’t want to be forgotten anymore.”

Before George Floyd, Eric Garner made headlines in 2014 after an NYPD officer killed him with a fatal chokehold on Staten Island. Six years later, the largest protest to take place on the island happened in June 2020, organized by the Young Leaders of Staten Island.

Buffong and other like-minded youth found each other through a different civil rights protest on the island. But a few days later, the younger participants got back together through common concerns. They felt their own needs and voices weren’t being addressed.

Staten Island, like much of the city, is racially and socioeconomically segregated. While the other four boroughs tend to be more progessive, Staten Island has historically leaned conservative, impacting the culture of the island.

As a young Black man, Buffong says he felt that tension all of his life. “You hear a lot of these sly remarks,” Buffong says. “For lack of a better word, the innocent racism. You hear it a lot. Especially on Staten Island where it seems to be more stuck in the ‘70s.”

The Young Leaders of Staten Island focuses on breaching the racial divide on the island. “It’s an open space where we can talk freely about anything,” says Buffong.

The group has a lot of plans for the future and the kind of work members want to do, like highlighting Black businesses and entrepreneurs on the island. Most importantly, Buffong says, he wants to “build Staten Island as a cool borough.”

Staten Island was cool enough for a visit from 33-year-old cyclist Andrew Bennett. It was one of the bike trips he helped lead recently with his cycling club Good Company. Born out of COVID fatigue and a need to find new ways to safely recreate and socialize, Good Company Bike Club hosted its first casual bike meetup in May 2020. Drawing 17 riders at first, Bennett’s group quickly expanded after Brooklyn Borough President Eric Adams got involved with their Juneteenth ride.

Bennett was overwhelmed by the amount of people who came to ride alongside him and his friends. “I guess I got a bike club now,” he thought during the Juneteenth ride.

Many New Yorkers picked up biking as a hobby during the pandemic, and for Bennett, it was important that other people of color had a space to access the sport. Bennett says.  “We do this to let people know that cycling shouldn’t be reserved for older white men. I want to make it more equitable across the board.”

While cycling for a cause matters a lot to Bennett and other members of Good Company, he says riding recreationally, without a bigger message attached, is important as well. “Just because we’re a group of Black bikers, we’re not necessarily protesting” says Bennett. “I’m just having fun.”

According to Bennett, some folks see the large bike groups, made up of people of color, as a threat. During one ride through Harlem, he recalls getting an alert about the ride on the Citizen app, which reports local crime, while helicopters flew overhead. 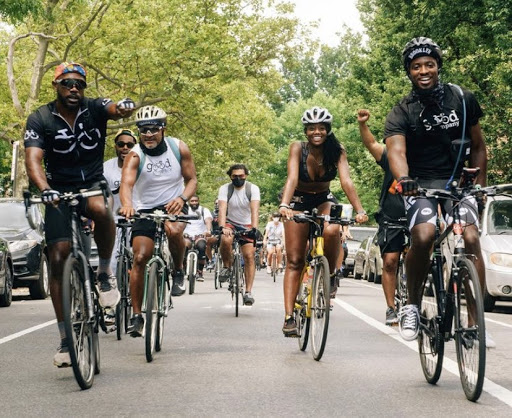 For Bennett and his fellow club members, these experiences are even more reason to continue biking and taking up space in the sport: to normalize their fun.

“We’re more of a social group that happens to cycle” Bennett jokes. In fact, the group’s name, Good Company, was inspired by the community that comes from the shared enjoyment of a ride. Just spending time with each other in “good company,” keeps people returning to the rides, a much needed escape from pandemic stress.

Bennett has a lot of plans for the future of the bike club, including how the group will keep momentum during the winter months.

“If we’re all going to survive in this new world that’s being created,” Taveras of the Fridge Girls says, “we all need to work together a little bit more.”

For these young New Yorkers, their work has just begun.