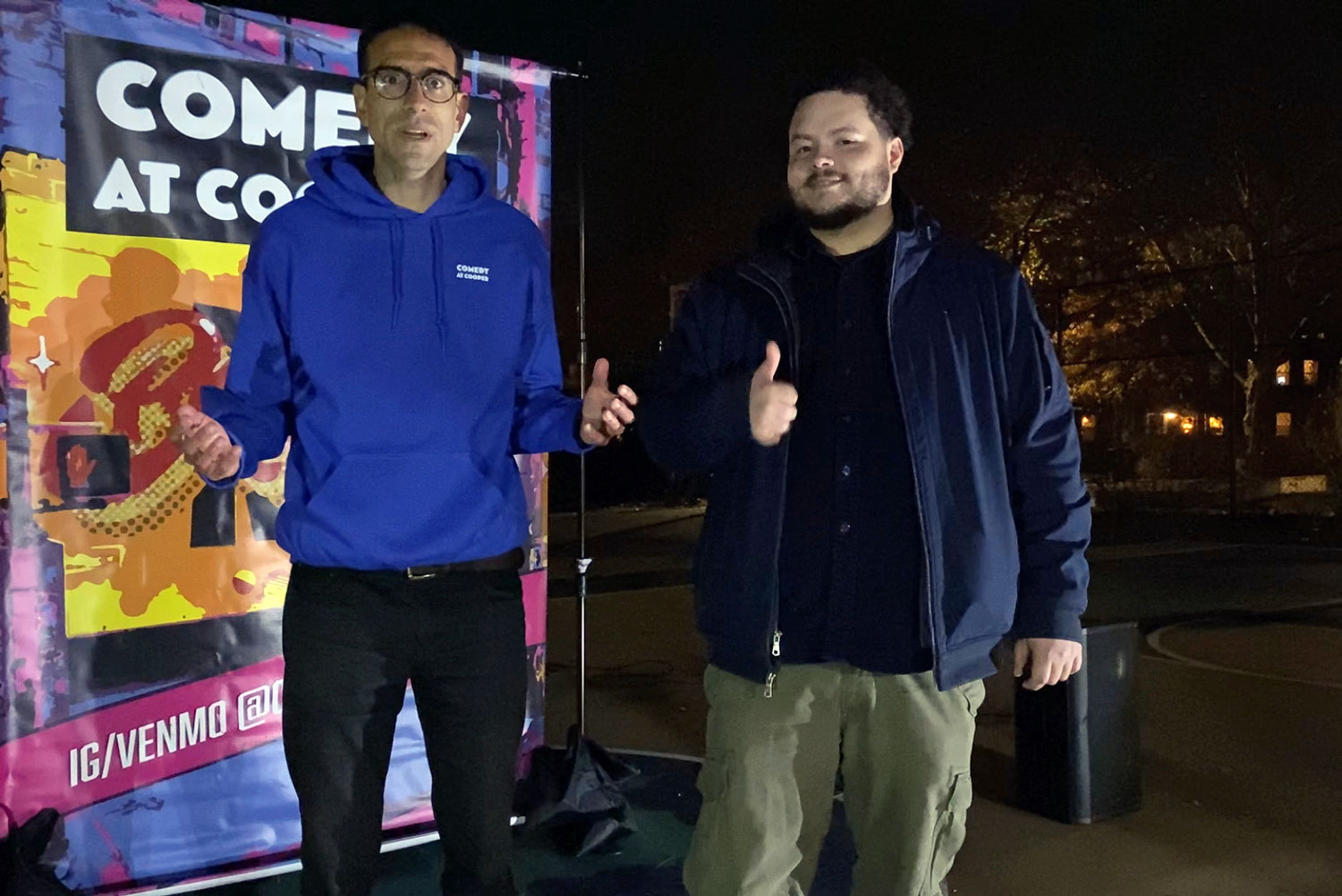 The sentiment is shared by their audience. “It just feels great to be around other humans, laugh, and for a moment forget there’s a pandemic around us,” said Emily Clark, an attendee. “It shows how lights can still shine. It’s special.” ⇒ cont. 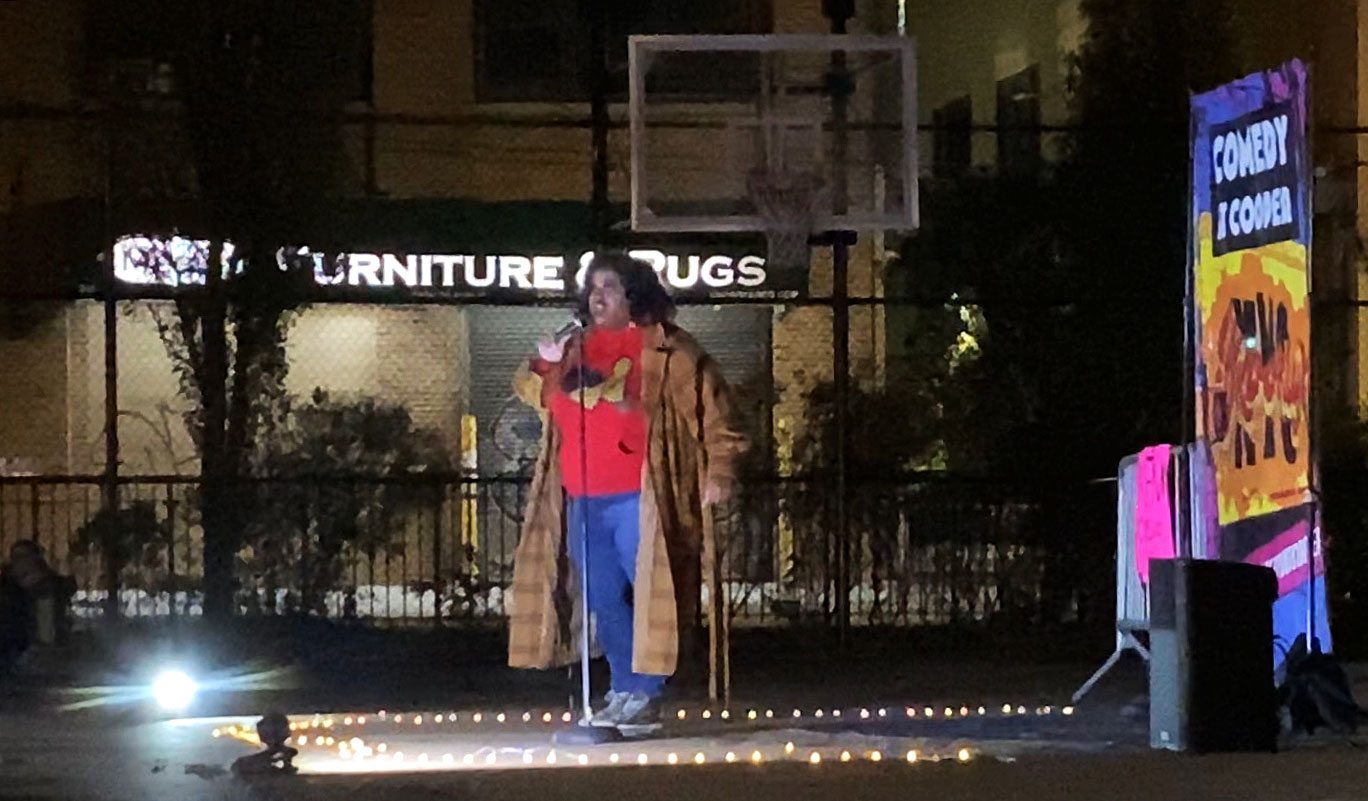 Kirk Mulligan lives near Cooper Park and was thrilled to see the show take off. “When Nate and Julio brought the joy and laughter to all of us in the neighborhood, it gave us the hope we were looking for,” he said. “Life felt a bit more normal, we could laugh at the new ways of life we all were experiencing, and it brought a lot of us closer together.”

The consistent draw of about 100 comedy fans each week has allowed Habib and Diaz to bring in some of the city’s top-tier talent. Shows have featured national headlining comedians such as Mark Normand and Joe List. Habib noted that “the only reason we’re able to get the best comics at our show is because we have a consistent fan base that comes out.”

“Comedy at Cooper” is not alone in its mission to keep comedy alive in the pandemic. Throughout this year, a number of outdoor shows have  popped up around the city.

The Upper West Side venue Stand Up New York sponsored a series of park shows throughout the five boroughs, while Union Square’s The Stand has featured comics performing during outdoor dinners.

The Skyline Drive-In movie theater in Greenpoint, Brooklyn hosted a drive-in comedy show led by “Saturday Night Live” alum Colin Quinn. The show featured Quinn and a lineup of local comics that was filmed for an HBO special.

Comedian Sam Morril took matters into his own hands and reached out on social media to New Yorkers to put on small, socially-distant shows on residential rooftops.

“Comedy clubs are closed, but I still want to do stand up,” Morril said in a promo video for a special he filmed during these rooftop sets. “I think we just gotta get people’s roofs, get a mic and amp, that’s all we need.” Morril compiled footage from the shows and self-funded a special called “Up on the Roof” that he put up for free on YouTube.

As temperatures dropped ever lower though, these outdoor comedy shows became more scarce. That’s where “Comedy at Cooper” has really stood out.

I think we just gotta get people’s roofs, get a mic and amp, that’s all we need.

They kept the show rolling well into December. At their last show for 2020, 50 people showed up in 35-degree weather.

They’re putting the show on a short break for the winter, assuring fans that they’ll be back as soon as they’re not up against freezing temperatures.

Habib and Diaz want to keep the laughs alive to give back to the community and because it helps them work harder to improve their acts. Having to compete with blaring sirens, noisy trucks and blaring car horns makes connecting with an audience outdoors no easy feat. They’re excited to discover how this experience will shape their performances when they get back into clubs.

“If you’re putting yourself through it now, at this time, then when things go to wherever they’re gonna go to, you’re going to be so advanced at whatever craft it is you do, it’s gonna be mind-boggling,” Diaz said. “When we’re back at the clubs, it’s gonna be a home run every single time we step up on that stage!”

Looking ahead, the duo are confident that, pandemic or not, their audience will stand by them. “If venues are still not open in the summer, there’s a good chance we’ll see over 200 people come out every week,” Habib said.

“The long-term goal is to secure a venue near the park and become one of the best independently run comedy shows in NYC.” 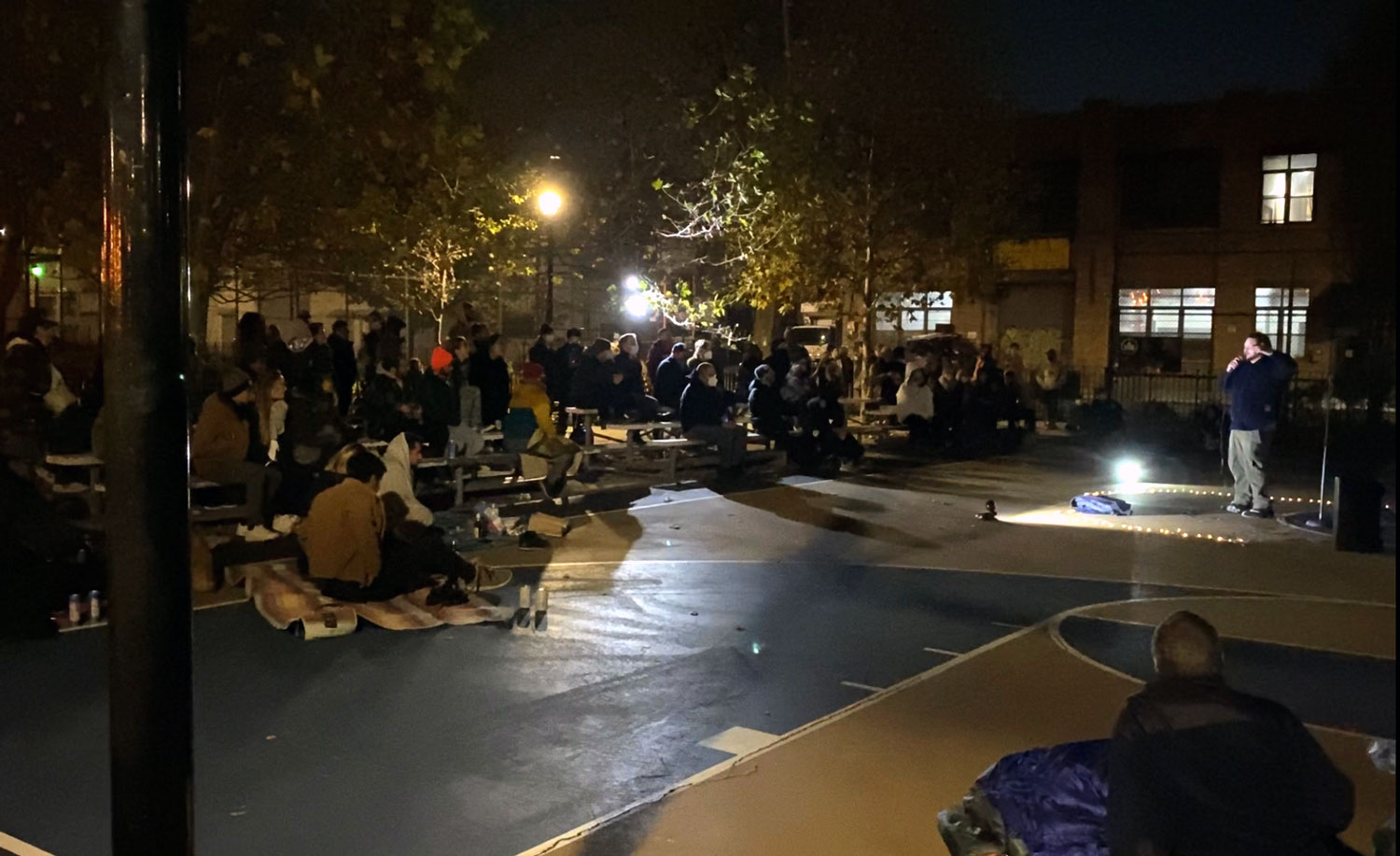 Comedian and organizer of ‘Comedy at Cooper’, Julio Diaz, performs to a packed crowd in Cooper Park. (Brandon Futernick)